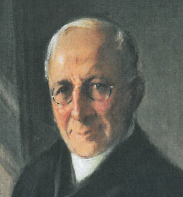 The Central Catholic Library was founded in 1924 by the famous Fr William Hackett SJ, with the support of the then Archbishop Daniel Mannix.

Archbishop Mannix invited influential Catholics to a meeting where the formation of a library was discussed on the motion of Father Hackett. The Archbishop donated £100 to the subscription list, and continued promote the project. The efforts of Father Hackett and his helpers built up a thriving institution.

The Library was modelled on a similar institution in Dublin, Ireland. In his biography of Mannix, Frank Murphy records that that the library became a centre of literary, social and intellectual activity, playing ‘an ever increasing role in the formation of the mind of the Catholic community. As a meeting-place, as well as a library, with regular lectures and discussions, formal and informal, it became a centre indeed’.

The Library has had various locations in its history, including the Orient Line Building on Collins Street, the current ‘Harley Heaven’ on Little Lonsdale Street, and above the Catholic Bookshop on Elizabeth St.

It relocated to its current address when the Melbourne Archdiocese ceased to maintain the Central Catholic Library in 1993. Rather than allow the collection to be dispersed, a group of lay people relaunched it as the Caroline Chisholm Library.

Today, the Caroline Chisholm Library is the last surviving Catholic library serving the general laity in Australia. It continues to act as a meeting place and centre of social and intellectual activity for Australian Catholics.